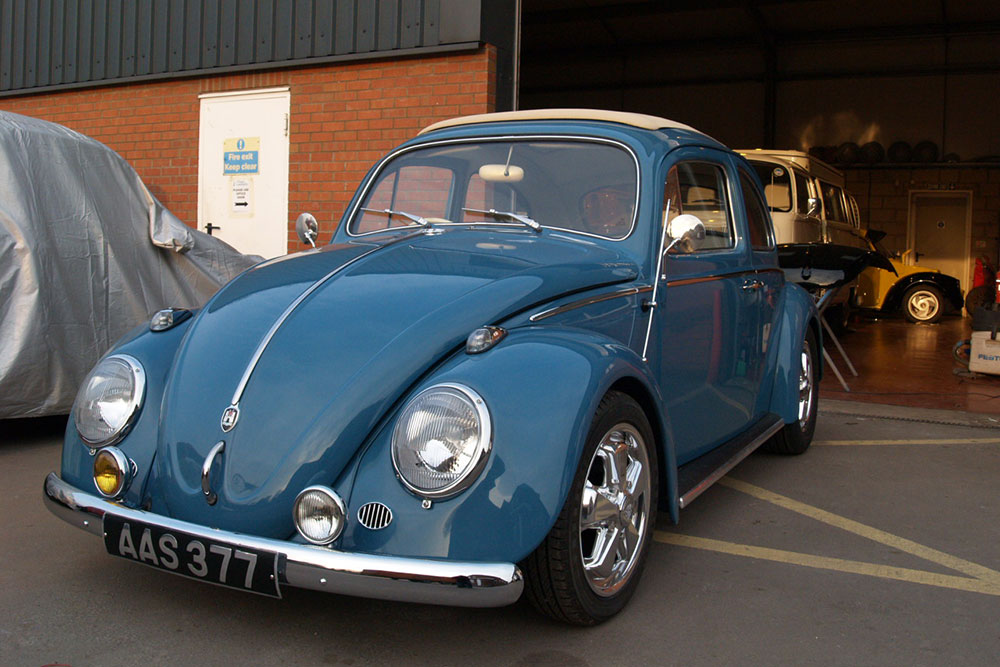 This 1962 beetle is a good example of why you should view before you bid. The customer who brought this project to our workshop knew the car was in poor condition, however it was only after we’d sent the car to be stripped using a process called Pyrolysis Thermal Stripping that the true extent of the rot became clear. The entire body was riddled with holes and the roof was severely dented, and although we suggested that he scrap the bodyshell the customer was still determined to see the project through.

Because the roof was in such poor condition the owner sourced a donor car; a ’58 beetle which despite being in an even worse condition had near perfect gutters and roof and had the additional benefit of being a factory ragtop. Along with the roof transplant almost every other panel on the beetle was either replaced or extensively restored. We sourced genuine panels where possible and hand-built those that weren’t commercially available.

The beetle was destined to be a high-quality show car and the extensive bodywork was only one element of that. The owner chose to return the beetle to its original colour of Gulf Blue (L390) despite it being black when he bought it. Not only was the exterior painted to an exceptionally high standard but the spare wheel well, engine bay and underside of the wings were also finished to the same standard.

We fitted the beetle with a Flat 4 Banjo steering wheel, a Retro Sounds radio with mp3 player and a Vintage Speed Quickshifter gearstick working with a Cogbox rebuilt gearbox. We also modified the dashboard to house a pair of Smiths gauges to the right of the speedo which allow the driver to monitor the oil pressure and oil temperature.

The owner wanted to be able to control the internal temperature of the car easily so we installed a Webasto heater with variable temperature control, which we mounted behind the rear seat in a bespoke metal housing, plumbed into the original heater channels and put the operating switch in the glove compartment. To top off the array of mod cons, we also installed a heated rear windscreen.

The beetle was fitted with EMPI dropped spindles, we welded Sway-a-Ways into the beam to lower the nose and the back was fitted with adjustable spring plates. The engine, which was colour coded to match the body, started as a 1600cc AS41 case but was bored out to accept 90.5mm barrels and pistons. The engine was built with performance in mind, with a lightened flywheel, Engle 110 cam, polished and ported heads, twin 40 IDF Webers, K&N filters and a BMC Serpentine pulley and belt kit. The stainless steel Vintage Speed exhaust fits in nicely with the trim and the overall look of the beetle.

Since its completion the owner returns the beetle to us each year for us to carry out a pre-MOT check, take it to MOT and carry out small maintenance jobs. We love seeing it come back every year and hearing about where it’s been since last time. You may have seen this beetle at the 2012 Volksworld Show or in the February 2013 issue of the Volksworld magazine.