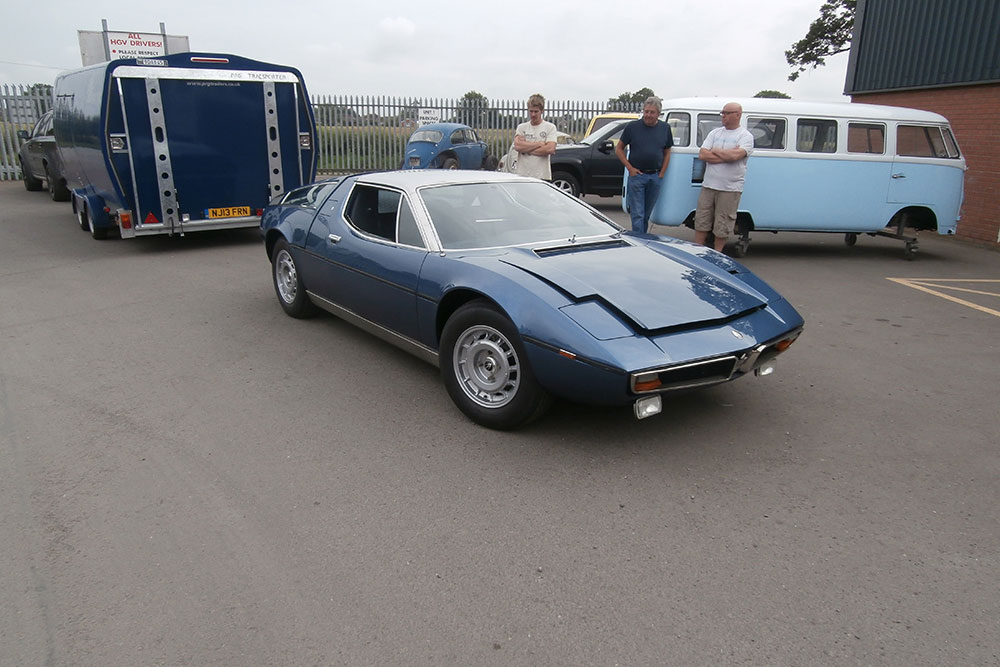 After we had completed a body and paint restoration on a 1960 Alfa Romeo Guilia Spyder the owner returned to us with a 1972 Maserati Bora which needed a full restoration and new paint work.

The Bora was a USA import and it was clear that it had suffered quite badly with evidence of poor accident repairs and bad paintwork. The owner had totally disassembled the car and delivered a soda-blasted shell and bottom panels to us for repair and paint.

The owner wanted the car restored to its original colour so once the bodywork was finished the Maserati was painted in a base and clear lacquer finish. The owner collected the freshly restored body and bolt-on panels and reassembled them at his own workshop. The car was then sent out to be trimmed by a company that the owner has used many times before.

Once it has been reassembled and trimmed, the Bora came back to us for a final wet flat and machine polish. We then bonded in the front and rear screens and the fixed glass into place, and fitted the stainless steel gutter trim and glass edge trims.

After completion the owner took the Maserati for MOT and had it registered in the UK, before taking it to some UK shows where it received awards for its top quality. The icing on the cake however was when the owner took it to Italy for the Maserati Centenary Celebrations in Modena. Amongst the best Maserati’s from all over Europe the Bora placed third overall, with the bodywork and paintwork being specifically mentioned.

Following the success of the Alfa Romeo and the Maserati Bora, we have since completed a full body and paint restoration on the owners latest project; a Maserati Merak SS RHD.