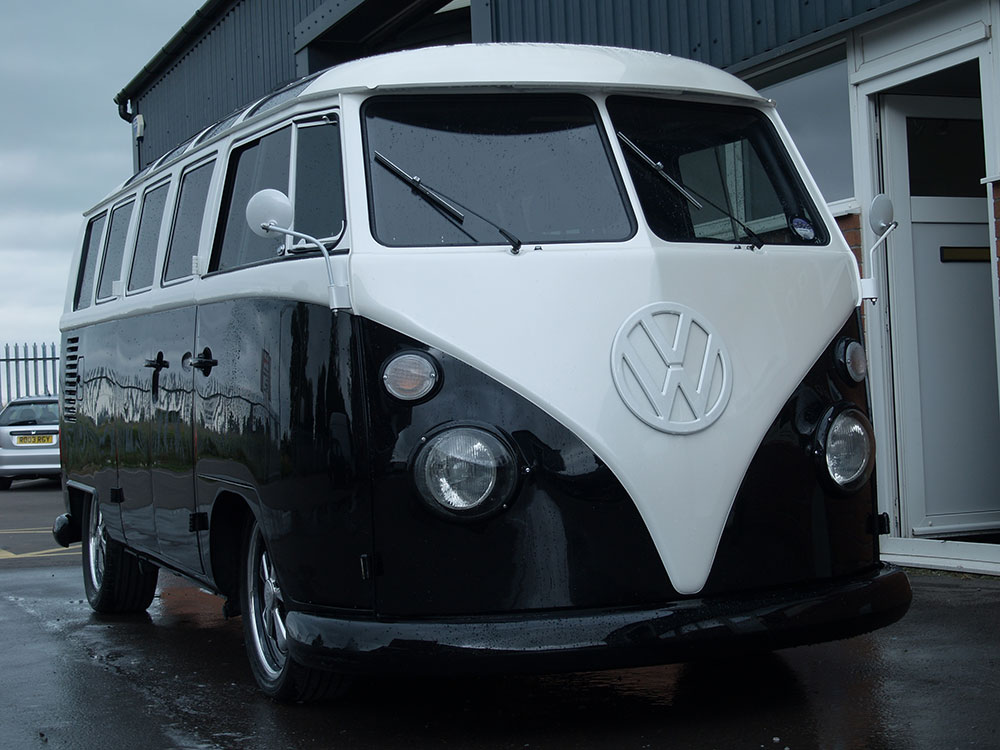 In 2007 we were approached by a customer who wanted to build a Porsche powered Splitscreen. He had drawn inspiration from various other vehicles and was set on creating a Splitscreen that looked like the product of a Volkswagen/ Porsche collaboration. The Split needed to be sleek, understated and capable of high-speed comfortable travel.

We sourced a Samba with fairly clean bodywork to the project and once we’d stripped it back to a bare shell we go started on the modification work to allow the Porsche engine to fit inside the engine bay. To start with the torsion housing centre boss had to be cut, along with all of the engine bay side panels and some of the fuel tank shelf. The rear valance also needed to  be trimmed to allow the engine to fit and the torsion tubes were narrowed by 40mm each side so that the wheels  sat central in the wheel tubs. We then cut an inspection hatch into the load area over the engine and fabricated an integral roll cage to allow as much interior space as possible as well as providing extra safety. As the bodywork on the Samba had been fairly good we only had to replace a few sections of the roof windows with panels from Autocraft Engineering and a small corroded section on the floor before the bus went off to be chemically stripped.

The owner wanted the Samba chemically stripped and electrophoretically painted to ensure that the finished bus would last as long as possible. Unfortunately this stripping and coating process resulted in some damage to the long and short side panels and the lower nose section meaning that these panels had to be removed and replaced with new items. The chemical stripping also uncovered corrosion on the nearside inner sill which was repaired and we then straightened some previous accident damage to the rear lower corners. At this stage we also fitted new outer belly pans and modified the dash to house the VDO gauges.

After all the minor scratch and dent repairs had been finished the bodyshell and separate panels were readied for primer. They were etch primed, then primered with a high build filler before being block sanded, re-primered and blocked again to create the straightest finish possible. The owner had decided at the start of the project that he wanted a company he had used before and that was local to him to apply the paint to the Samba. The owner chose Nissan Pearl White and Peugeot Mica Black for the body colours, as well as choosing to have much of the chrome painted to complete the understated look of the car.

Once the Samba had been painted and returned to us we started the fit up which included a Creative Engineering rack and pinion steering conversion and Weedeater beam. The braking system of 944 discs and calipers was installed with all new/refurbished components and we modified a hydraulic clutch kit from Creative Engineering to fit inside the frame rails. A new standard wiring loom was installed along with additional wiring for the electronics required to run the fuel-injected motor and the additional gauges. The new fuel tank, fuel injection pump, dry-sump oil tank and the 3.2 litre engine and overhauled gearbox were refitted into the modified Samba. A petro powered Webasto heater was fitted under the front seats and twin batteries were fitted which were accessible from under the rear seating. We fabricated a removable centre belly pan to allow access to the gear and handbrake linkage as well as the fuel pump for the Webasto heater.

After this initial fitting the Samba was delivered to the owners choice of upholsters to be outfitted with the interior furniture and trimming. The owner chose to have the entire interior of the Samba trimmed in black leather and Alcantara, including the dash, roll cage and interior units. The Samba was then returned to us for the final assembly, including the audio system, new tinted glass and gauges. We also fabricated a removable Towbar to allow the owner to tow a motorbike trailer or attach a pushbike rack. The owner chose to sit the Samba on a set of OE detailed 911 Fuchs wheels fitted with Continental tyres to complete the sleek look.

You may have seen the Samba featured in the November 2009 issue of UltraVW.