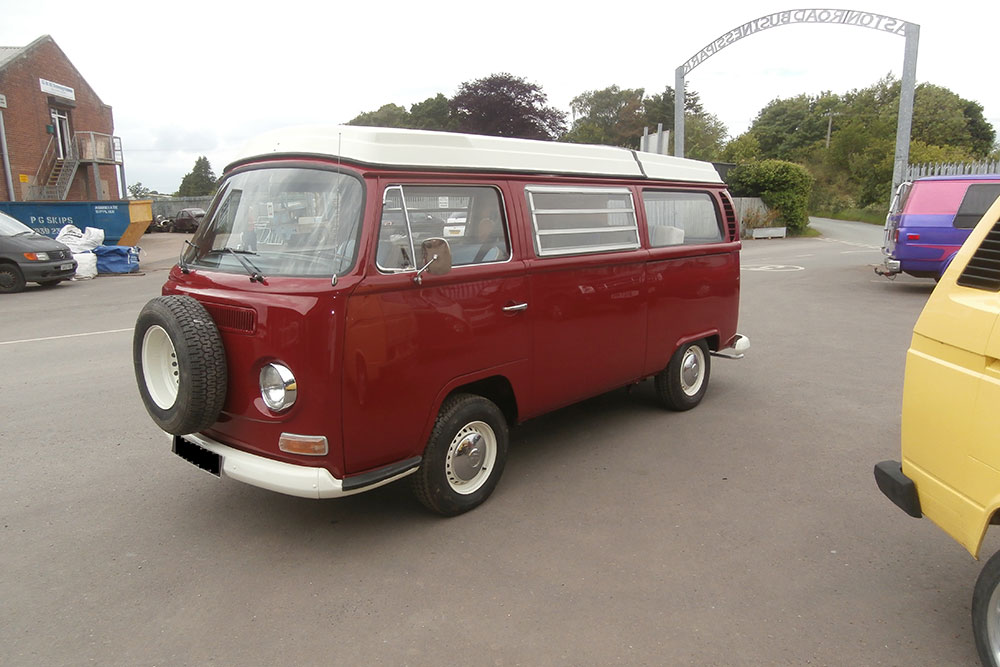 We’ve carried out lots of minor maintenance jobs on Ruby the Early Westy Bay Window over the last couple of years, but last summer her owners brought her in for a bare-metal respray and to have a new pop-up canvas made and fitted.

We knew that the bay had been in a collision at some point, and there was rust popping up in various places so we were aware there would be a fair amount of bodywork required. The paint was initially removed with chemical paint stripper and scrapers; a job which needs to be done carefully to avoid deep scratches or denting the bodywork and causing further work later on. Once the majority of the paint had been removed, the paint and paint stripper residues were cleaned off then wire brushed and machine sanded before being wiped down for the bodywork to begin.

We removed rotten sections from the left hand door inner, the right hand front step outer section and the lower section of the left hand wheel housing, and fabricated repair panels which were then welded into place. The front section which had been damaged in a previous collision was in a bad way having been poorly repaired previously, so the lower section was cut away and a replacement panel was trimmed to size and welded into place. We also replaced the rear seat belt mounts, the front windscreen channels and replaced a damaged section of the cab door. Repair work was also carried out on the fibreglass roof to replace the wood frame and strengthen it before the new roof canvas was fitted.

Once all the repairs had taken place the bodywork was straightened and Ruby was painted in Chianti with a Pearl White roof. The wiring was then tidied up and the re-fit got underway. Ruby’s owners wanted to be involved as much as possible with the fitting, so once the newly made roof canvas was fitted, they came in to help out. The owners had not long re-trimmed their interior so all they needed to do was put everything back into place. One of Ruby’s owners is an artist and she made a silk painting inspired by a photograph taken on their first adventure in Ruby for the rear window behind the wardrobe.

Since completion Ruby has been on lots of adventures, including trips to Wales and France, and her owners are planning a trip to Scotland this year!