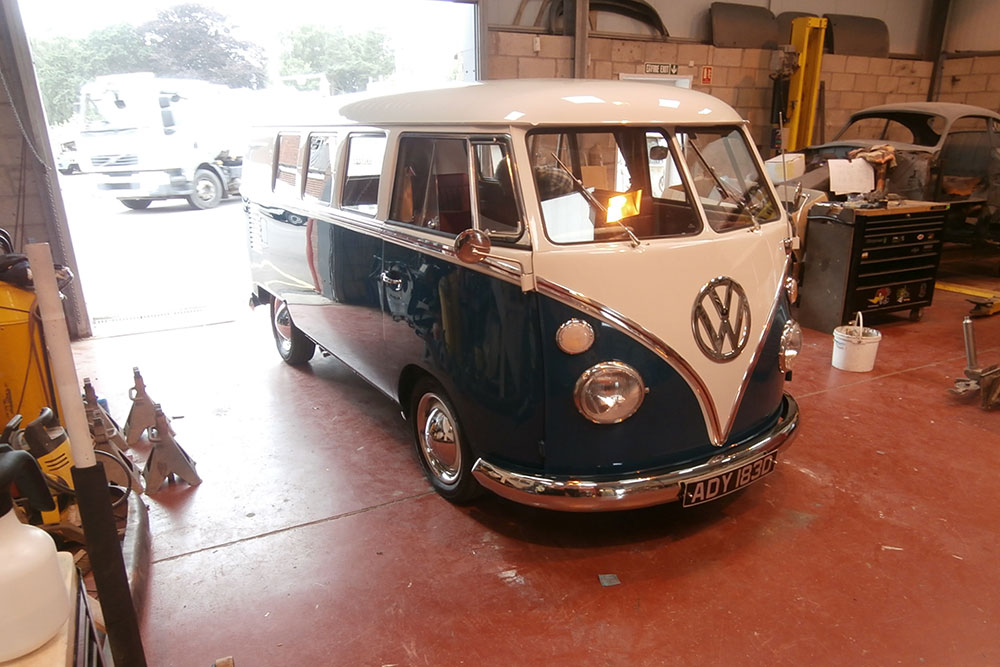 In 2011 a customer came to see us in the hope of fulfilling a lifelong dream of owning a Splitscreen, and after looking over his wish list we sourced a right hand ’66 Canterbury Pitt still boasting its original interior units. Once the split was delivered to our workshop we began stripping it down; removing the Canterbury Pitt unit (which the owner wanted to keep for his study) and then media-blasting the entire bus to reveal a patchwork of previous repairs. Naturally, the owner wanted a restoration that would stand the test of time, so we began the process of restoring panels that could be saved and replacing those which were too far gone.

The cargo floor, outriggers, jacking points, top hats and main i-beams were completely replaced, as were the rear lower corners and the long and short side panels. Despite its poor condition we were able to save the cab floor through extensive restoration. During this process we used both commercially available replacement panels and panels hand-made in our workshop where panels were not available to buy.

The Splitscreen was fitted with an adjustable beam, an IRS conversion with adjustable spring plates, as well as having a few custom modifications. We modified the rear crossmember by adding in a sleeve through which the oil pipes could travel to feed a remote oil-cooler which was mounted onto the chassis with tags. The Splitscreen was also fitted with a Creative Engineering steering rack conversion along with their servo system.

We rebuilt the 1776 engine in-house with Engle VZ15 cam for low torque, dual Kadrons for efficient fuelling and a stainless VW Speed Shop Side Winder exhaust not only to match the chrome on the body but also for performance.

The owner chose to have the Split repainted in its original colours of Cumulus White (L680) and Sea Blue (L360), offset by Deluxe body trim, a stainless steel nose badge and six fully polished pop out windows. The underside of the Split was coated in ant-stonechip paint and then coated the same Sea Blue as the lower half of the body.

The owner wanted an interior inspired by a gentleman’s club; so we sourced bespoke hand-made cabinets covered in Walnut veneer. We then sprayed the worktops in black mica with an anti-scratch coating. The cabinets house a two-burner hob, a 12v Waeco fridge-freezer and storage. We also fitted a layer of Noisekiller insulation to keep the heat in and the sound out, as well as a Propex heater. We fabricated a front bench seat to replicate the original VW item which was then trimmed in red leather along with the rest of the interior including door cards, roof vent, grab handle and parcel tray. The cab area floor and load bay was fitted with a custom-made German Square weave carpet edged in leather to match the seats and door cards, the cargo area was fitted with a wooden floor, and a rug to match the cab area which sat flush to the wooden floor.  The headliner was custom made from West of England wool cloth.

You may have seen the Splitscreen in Volksworld Camper and Bus magazine in February 2014.