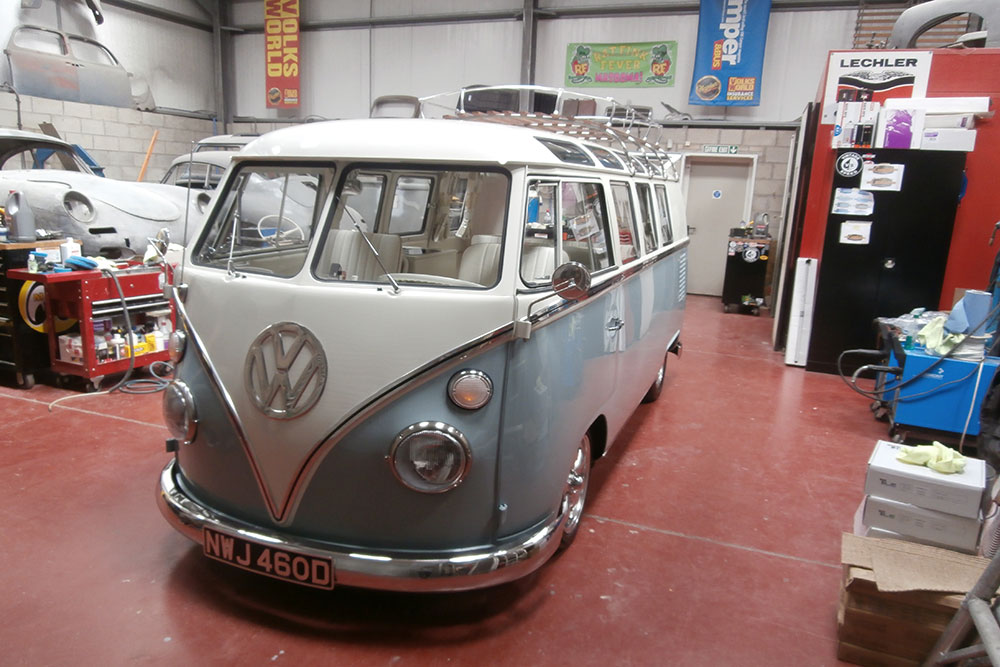 When the owner of this Arizonan ’65 Splitscreen came to us the camper had been sat awaiting restoration at another workshop for a few years. Despite previous setbacks the owner was excited to start the project and the time that she had lost on the project while it sat waiting had allowed her to clearly visualise what she wanted from her Split. The owner had decided on a cosy camper that could be enjoyed with her family as well as being lent to her friends for weddings and special occasions.

The owner was more interested in creating a camper than would work for her from both a practical and design perspective than trying to retain originality. Whilst visiting our workshop the owner had seen work being carried out on a crew-cab Splitscreen pickup that we were fitting Samba roof lights into and she loved the idea, so the modification was replicated on her project. We sourced roof light panels from Autocraft Engineering and carefully grafted them into place. The effect on the interior was substantial; allowing more light to flood both the cab and cargo area whilst looking factory to the untrained eye. Along with the extra windows, major restoration work was undertaken elsewhere; with the bottom six inches being replaced as well as a large amount of the front end and the chassis. The worn steering box was also replaced with a Creative Engineering rack and pinion conversion along with their servo system and CSP front discs.

We then got to work stripping down the 1600 engine and rebuilding it with a brand new original VW crank and a Scat C25 cam. The engine was rebuilt with 87mm barrels and pistons, VW 040 cylinder heads and a twin set of 40 Kadron carbs. The Vintage Speed exhaust system we fitted also heats the cab area via new heat exchangers.

Holding true to her desire to have a very personal camper the owner used her design experience to choose the paint colours. Although the top colour is fairly traditional, ever popular VW Pastel White, the bottom colour is BMW Ice Blue, which despite being a modern colour lends itself well to the retro style of the camper. The choice of paint colours look particularly striking when offset with the Deluxe trim.

The owner wanted the Splitscreen to be functional as a camper, so we hand-built a bespoke cabinet to house a fridge and hob, an overhead locker for extra storage, as well as a table that can be removed when the bed is laid out. We modified and painted a Creative Engineering rock ‘n’ roll bed and buddy seat to coordinate with the interior as well as painting the cab seat frames to match. The seats, door cards, and rear rock ‘n’ roll bed cushion were trimmed in white leather with tan piping. The cab area and load bay were fitted with sisal carpets edged in tan to match the seat piping, and the cargo area was fitted with wooden flooring. The owner chose two bright patterned fabrics for the curtains to tie in with the body and upholstery colours.

Since we completed the project the camper has formed the focal point of a garden display designed by the owner for the NSPCC at the Harrogate Autumn Flower Show, as well as being displayed at the Volksworld Show in 2015. You may also recognise the camper from the November 2015 Volksworld Camper and Bus magazine.